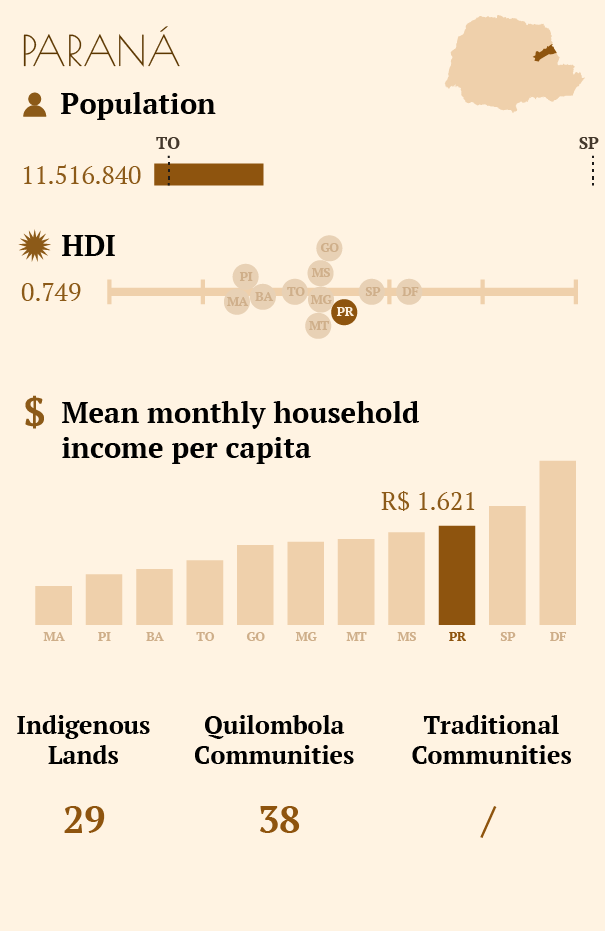 The Cerrado extends all the way to the south of Brazil, where on the borders of the state of Paraná, the Brazilian savannah meets and mixes with the Campos Gerais region. The Cerrado vegetation is significantly devastated yet it resists, primarily within conservation areas. Outside these areas of environmental protection, the austral portion of the Biome has all but disappeared.

The Cerrado originally occupied one percent of the state of Paraná’s territory. Presently, it is estimated that only 0,24 percent of that area remains and almost half of it is found within conservation areas. In general, the destruction of the Biome occurred for much of the same reasons as it did in other states, namely, because of the pressure of deforestation to make way for agriculture and the absence of environmental protection policies.

Spanning a smaller area than other vegetation types of Paraná, little consideration and value was given to the Cerrado throughout the years. A study by the Universidade Estadual de Ponta Grossa (UEPG – State university of Ponta Grossa) discovered that populations living in the north of the state around the remnant portions of the Cerrado give little importance to the Biome. Through interviews with government officials of the municipalities of the region, researcher Hebner Gonçalves noted a lack of preparation for the elaboration of effective conservation policies. According to the same study, many in the region believe that the remnant Cerrado found outside conservation areas is already on its way to extinction.

As is the case in other parts of the Biome, the most recent interaction between humans and the environment has been of an extractive nature. In the north of Paraná, livestock, agriculture, and silviculture have gradually transformed the landscape.  Seen as a biologically “poor” area, the Paraná Cerrado began to be exploited considerably during the ‘green revolution’, which implemented the technology capable of altering soil to meet the demands of agribusiness.

According to Gonçalves, generally speaking, the clearing of vegetation did not get the necessary attention from government authorities before the 1990s. The government did not regulate the areas before that period and authorized the transformation of landscapes of the Cerrado into farmland because they believed the northern grasslands of the state were, “a regenerating area, an abandoned area”.

The authorities only understood that those fields of twisted trees were the Cerrado after academic studies established that those northern areas of the state were in fact portions of the savannah Biome. As a consequence, the state of Paraná seeking to comply with international conventions and treaties signed by the federal government, created two parks to protect the remnants of the Biome. However, according to the study by UEPG, there is a lack in the capability to effectively oversee the protected areas and therefore parts of the Cerrado are still being converted into grain farmlands and eucalyptus plantations.

The battle for what is left

The primary area containing remnants of the Cerrado is the Parque Estadual do Cerrado (Cerrado state park) in the north of the state. There, guará wolves, giant anteaters, and trees characteristic of the savannah Biome can still be found. In addition to the park, the Área de Proteção Ambiental (APA) Escarpa Devoniana (Devonian Escarpment protection area) is another conservation haven with a striking landscape where the pine trees of the Campos Gerais meet the gnarled shrubs of the Cerrado. The rock formations of the escarpment, a postcard landscape of the state, are close to 400 million years old.

This region where the Cerrado meets the araucária fields is extremely rich in natural resources. In addition to the great biodiversity of plant and animal species, the area is of commercial interest to the agriculture and mining sectors. In 2016, a proposed law reducing the protected area by 70 percent was presented to the state legislature. Based on a study commissioned by agricultural cooperatives, the law was reviewed for two years before finally being dismissed in 2018 due to technical errors.

The proposal to reduce the conservation area was polemic and led to confrontation between agriculturalists and environmentalists. Despite the rejection of the proposed law, the situation around the conservation area is far from having been placated. According to the Latentes project, a program mapping agrarian conflicts in Brazil, because of Paraná’s mining activities, the environmental protection area of the Devonian escarpment is one of 194 places where there is a risk of socio-environmental conflict.

According to information from the site Plural, the soil surrounding the escarpment is rich in sandstone and has the interest of a sand mining company. The company is seeking to obtain authorization to mine the area, but for now, it has been prohibited from doing so by the legal mechanisms in place that protect official conservation areas.

Presently, there is an ongoing dispute in Paraná on the interpretation of what can and cannot be done inside an APA (environmental protection area). After a preliminary study, the mining company argued that ” the APAs, strictly speaking, should not be seen as a conservation area, but rather, as areas subject to a particular regulation of environmental management.” For Gilson Guimarães, a researcher at the state university of Ponta Grossa, this dispute on the exploitation of resources on the Devonian escarpment must be taken seriously. ” If the environmental department of the state of Paraná accepts the interpretation that, broadly speaking, the APAs can allow any type of extraction activity, the damage on a local, regional, and national level will be enormous,” he said in an interview to Livre.jor.

It first belonged to Indigenous peoples

First Peoples collectively used the old Cerrado lands of Paraná long before these contemporary disputes. In Paraná, as in the rest of the Brazilian Cerrado, human occupation occurred prior to the Iberian colonization of South America. There is evidence that as long as fifteen thousand years ago, people already inhabited the southern meadows. As is also the case in the rest of the Cerrado, the north of Paraná was home to indigenous peoples of the Macro Jê linguistic stock. 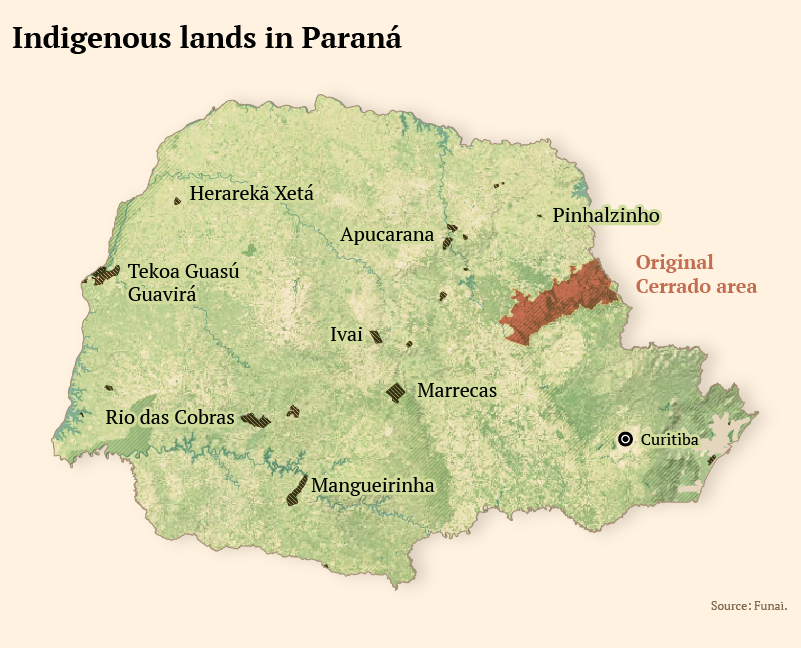 Studies reveal that the Jê moved from central-Brazil to the south, occupying regions with similar features as those of their departure point, namely, areas of Cerrado. The Kaingang and Xokleng peoples settled in the plateaus of Paraná and remained in the region until the arrival of white colonizers.

Throughout the 18th and 19th centuries, a large part of the indigenous populations of the region was progressively decimated, by both outsiders who wished to settle in the area, as well as officers of the crown who expelled, killed, and enslaved the First peoples.

Today, three indigenous ethnicities are left in the state: the Guarani, Kaingang and Xetá. The indigenous population is approximately 13.300 people, of which 70 percent are part of the Kaingang ethnicity of the Jê language stock. The majority of whom live on twenty-three Indigenous Territories demarcated by the federal government. The life of these communities is based on the use of natural resources combined with subsistence farms, orchard crops, and animal husbandry.

In Paraná, indigenous teachers school children in the Guarani or Kaingang languages, a practice that has contributed to the appreciation and value of traditional knowledge and the consequent conservation of cultural identity and traditional ways of life.