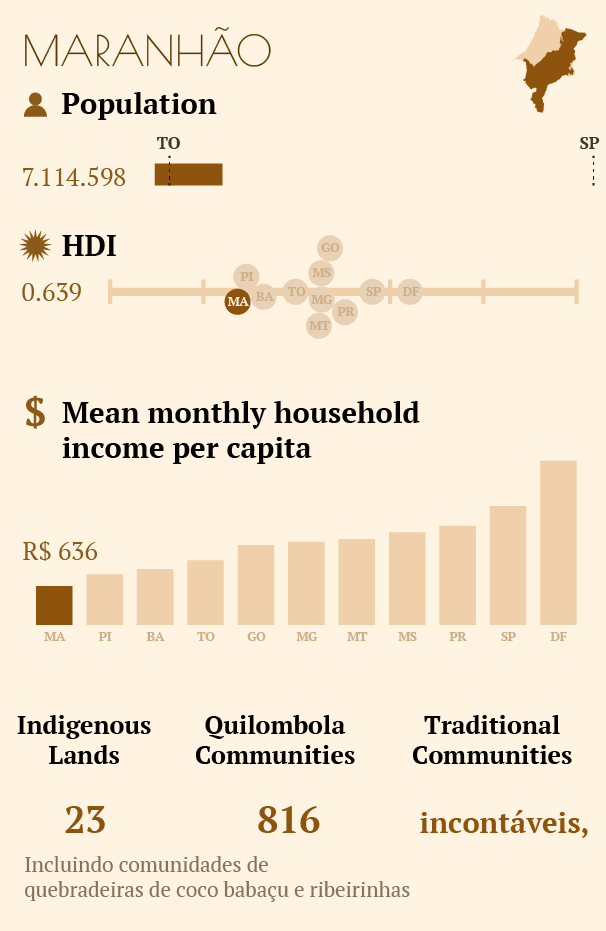 The women rendezvous at 6 am. They head towards the babaçu (a type of palm tree) forests carrying plastic bottles of water, axes, fruits, and sometimes manioc flour. These are coconut-breakers, women who retain a century-old sustainable gathering tradition of the Brazilian northeast.

The main fruit of the Cerrado’s native vegetation in the backcountry of the state of Maranhão is the babaçu coconut. The palm trees cover the most northern area of the Biome and are found in transitional regions between the Cerrado and the Amazon rainforest. Originally, the babaçuais (fields of babaçu palm trees) covered an area of 18,5 million hectares – the equivalent of roughly 75 percent of the area of the state of São Paulo.

Where they are still abundant, the palm trees are usually called “mãe de leite” (milk mother) for they have been the sustenance of countless generations of rural communities. In the words of Rosalva Silva, born in the rural community of Palmerândia in the interior of the state and raised as a coconut-breaker, “The harvesting of the babaçu coconut sums up our way of life: collective and integrated with nature.”

For over ninety years, women living in the backcountry of the Pará, Maranhão, Piauí, and Tocantins states have lived off the babaçu coconut. They come from rural communities with a very particular way of life, forged by their relationship with the palm trees. The “mother” trees provide food, fertilizer, income, and even shelter. “We use every bit of the palm tree: The straw is used to cover our houses and to make the walls; the coconut’s shell is used as coal and for handicrafts; the coconut’s flesh is used to make porridge, cakes, pudding, cookies, or as an extra ingredient in a shake. With the inside of the mesocarp, which has healing properties, we make medicine that can be applied on bruises. And I can’t forget the kernel, which is great for its oil.” Rosalva explains.

Extraction of the babaçu coconut is the main occupation of an estimated 300 thousand women in Brazil, most of which reside in the state of Maranhão. Spread out through the hinterland of the Cerrado, the babaçuais became central to the way of life of traditional communities. It is where they have developed their activities and grown their ancestral roots. Even with the advent of mechanized agriculture in the 1970s and 1980s, and the establishment of the cotton industry in the region, these communities have remained attached to the gathering of the babaçu coconut. The babaçu and the cultivation of crops on small plots make up their means of subsistence, one that is completely integrated with their environment.

” All peoples, whoever they might be, have a strong relationship to their environment. Whether they are a tribe, a traditional community, or a quilombo… Productivity and sustainability are the backbone of that relationship with the environment,” says Rosalva. She believes that if a mechanism providing sustenance is in place on a community’s land, it is only natural that a relationship of fondness and endearment for the life-giving source will develop.

In the case of many traditional communities in Maranhão, the relationship between the quebradeiras (coconut-breakers) and the palm trees goes beyond a simply financial or material one. As is the case in other traditional communities, like the raizeiras from Goías for example, some elements of nature become sacred and hallowed. Usually some form of worship or reverence of the trees and plants of traditional use develops; rituals, prayers, and cultural celebrations surround the acts of gathering fruits and the sowing of crops.

Holy Mother of the Quebradeiras
“Holy Palm tree, which is degraded,
Damned are those who cut, burn, and destroy.
Blessed is your fruit that nourishes
And on our deathbed still provides.
Holy mother palm tree,
Mother of true milk.
In your last hour,
Pray for us quebradeiras.”
From this deep connection between the community and the babaçu, a political movement for the conservation of the Cerrado and the defense of the rights of the quebradeiras and the palm trees was born.

” The expansion of cattle farming and the devastation of our lands has changed the economy of our region. The farmers’ economic project has been obliterating our crop plots, pushing back the babaçu… so our cultivation and way of life has also been changing.”

The history of the backcountry of the Maranhão state over the last forty years has been a history of land disputes. With the passing of the Sarney land laws in 1969, large expanses of public lands were auctioned and bought by estate owners. However, traditional communities already inhabited many of these territories. There, when the land used to be of common use, they had developed unique ways of life and farming. Evaristo Neto, a researcher of the Universidade Federal do Maranhão (Maranhão federal university) explains that after the law was passed, hundreds of communities were dispossessed of their lands. ” Someone would show up with a deed and the communities, having no papers for the land, would lose access to spaces where they cultivated the land or raised livestock. As the years went by, it became increasingly harder for those communities to continue to be productive and maintain their ways of life.”

The landowning issue reached its breaking point between the late 1980s and early 1990s. During that period, dozens of conflicts erupted between new landowners and organized communities who claimed the right to the lands they had lived on for decades. ” These populations only sought protection by the law when they became vulnerable to capitalist relations,” states Evaristo. According to the researcher, ” the need for official papers was not part of their everyday life prior to these conflicts, it made no sense within these communities’ cultures.”

The incongruity between the way of life and cultivation methods of traditional communities and the new models of agricultural development inevitably lead to clashes and to the transformation of the landscape. As years went by, and with the advent of mechanized agriculture, many rural families were restricted to living on smaller territories far from the babaçu forests.

It was during this period that the quebradeiras from Maranhão joined labor union movements and connected with other women living off the babaçu and facing similar problems in other states. ” In that sense, the restricted access to babaçu -one of the main sustenance products for many families- set forth a chain reaction of precarious living conditions in the communities.” says Roberta Lima, a geographer and researcher at Universidade Federal do Maranhão (Maranhão federal university).

When they realized their way of life was threatened, the quebradeiras began to organize and join forces. This coming together of women from various communities, from different states, lead to the creation of the Movimento Interestadual de Quebradeiras de Coco Babaçu (MIQCB – Interstate Movement of Coconut Breakers) in the 1990s.

“The movement was created because women thought, ‘We need to be independent, we need to organize and have our voices heard.’ That is when the liberation of women as gatherers, as rural workers, and as black women -which a majority of them are- will come,” says Rosalva. In its over thirty years of existence, the movement has gained entry to national councils on environmental issues, consolidated cooperatives, helped draft public policy, and guaranteed the protection of the palm tree.

The quebradeiras have formulated and passed the Babaçu Livre (free babaçu) law in thirteen municipalities and one state. The law grants the quebradeiras free access and communitarian use of the babaçus, even when the palm trees are located on private property. In addition to that, the law imposes restrictions on the felling of the palm trees.

In Roberta’s view, the quebradeiras’ defense of the palm tree is the defense of the way of life that has the babaçu at its center. This means fighting for the maintenance of a way of life that is directly linked and integrated with nature and as such, requires a healthy environment. For this reason, the geographer sees a direct relationship between the quebradeiras’ movement and the resistance movements of other traditional communities of Maranhão.

“The environmental issue is as essential to the quebradeiras as it is for indigenous peoples. By their efforts to reclaim usurped territories, the quebradeiras form a link between themselves and other rural communities,” says Roberta. She states that most of the rural settlements in Maranhão are a consequence of the struggles of communities who previously had lands in specific areas, which they inhabited and cultivated before those were expropriated.

In the Maranhão Cerrado, the movements of different communities converge. Deep down, the distinct ways of life of the various communities depend on each other. Communities seek unity in the Matopiba area where vegetation has been decimated at faster rates, and where the frontier of deforestation continues to advance. Rosalva explains that, ” the dialogue we wish to have is one where people recognize that the babaçu found on that land belongs to the native people who were there before this or that farmer bought or illegally claimed the land. Or that the fish in that river running through such and such’s land, belongs to those native people who were already fishing in that area before.” 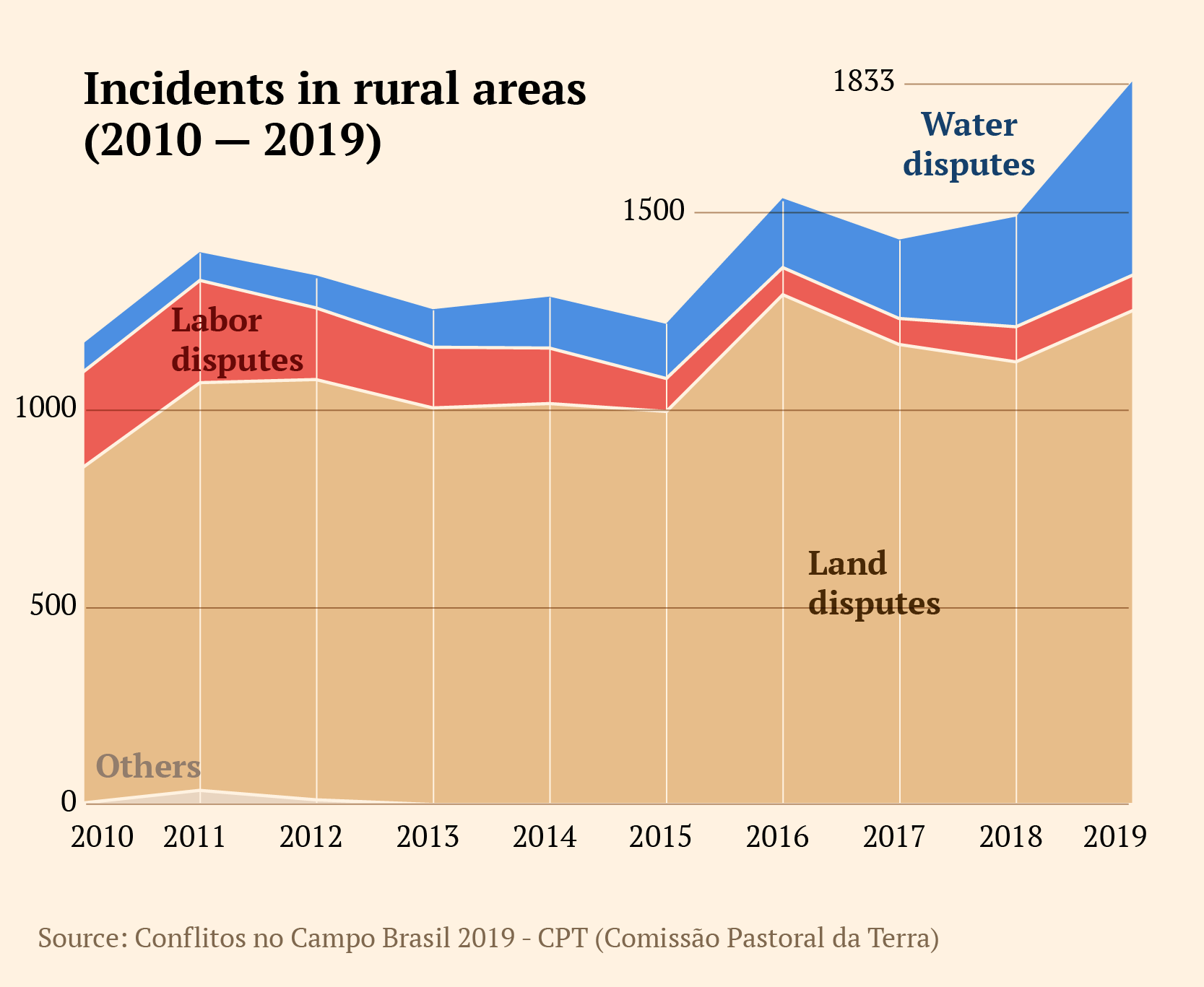 Land disputes between traditional communities and new agricultural enterprises have intensified all over the state. In the Cerrado area, the threat of the so-called “second wave of conflicts” began to increase starting in 2011. According to the reports of the Comissão Pastoral da Terra (CPT – ‘Pastoral da terra’ comission) the states of Maranhão and Pará have the highest numbers of conflicts in recent years. These cases involve predominantly indigenous, quilombola, and sertanejo communities.

The most direct threat is the expansion of agribusiness over 90 percent of the Maranhão Cerrado, an expansion consolidated by the emergence of Matopiba. The ecosystem that surrounds the quebradeira communities suffers from the proximity to soy and eucalyptus farmlands. The transformation of native vegetation significantly affects the daily lives of those living on the frontier of deforestation. ” That is why we propose a more human way of life, of gathering, one that creates healthy income and food under the light of ‘agro-ecology’. Our aim is that this idea will help us oppose the Matopiba, so that we can still have coconuts and live the quebradeira life,” says Rosalva.