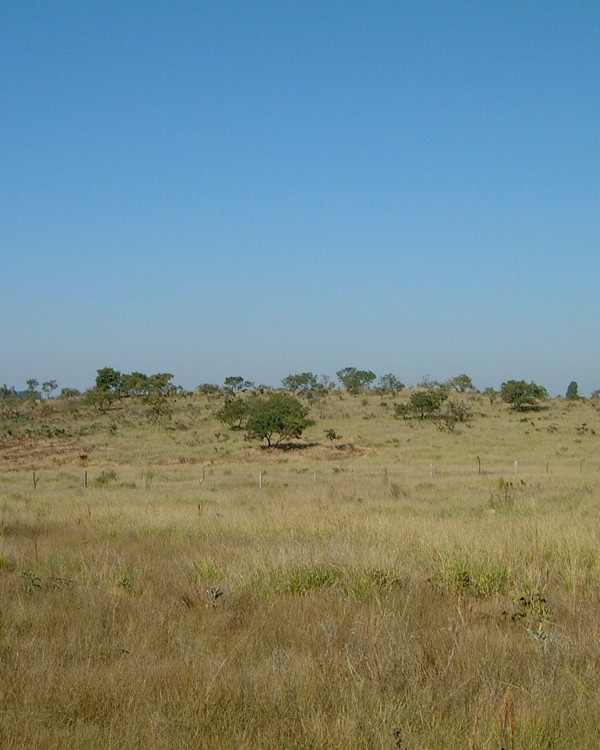 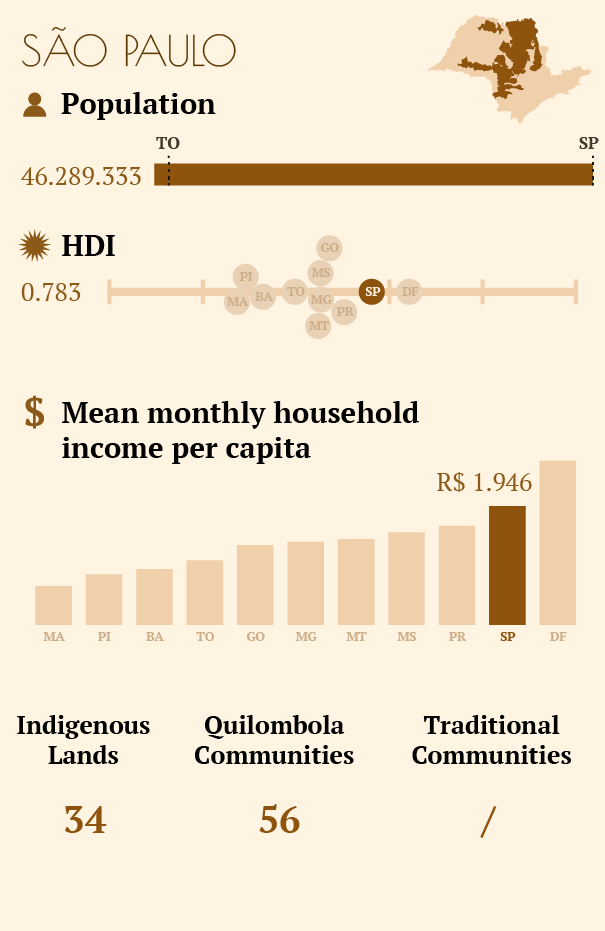 Ancient trees live on in the middle of the largest metropolis in Latin America. Ipês, murici, and araçá do campo, are a reminder that São Paulo was once Cerrado. In the time when the floodplains of the Tietê and Tamanduateí Rivers were still the Tupiniquims’ lands, the region where the Paulista* (of or from the state of São Paulo) capital is now located was a meeting point of woods and meadows.

In old records of early colonization there is frequent mention of the region as ” a place of meadows”. In 1585, Fernão Cardim, a Jesuit priest wrote that, “Piraitininga… is a land of great meadows…and grasslands… it is a beauty to behold.” The old grasslands of São Paulo were covered in the typical scrub vegetation, with its gnarled branches, of the Cerrado.

Five hundred years later and what is left of the Cerrado in the capital is but a memory of the natural path and range of a landscape that is interconnected with almost all other Biomes of Brazil. Two havens of this memory still exist in the western part of the city. One is on the campus of the University of São Paulo (Universidade de São Paulo – USP), around a water tower on the high part of the grounds. There, a few rare species from the Cerrado live on vigorously. One of those is the thorny shrub called língua-de-tucano (Toucan tongue), which used to be abundant in the original vegetation and was much used by the first colonizers to make espadrilles. The other remnant of the Biome is in the Jaguaré neighborhood in a park closed to the public, on a conservation area. 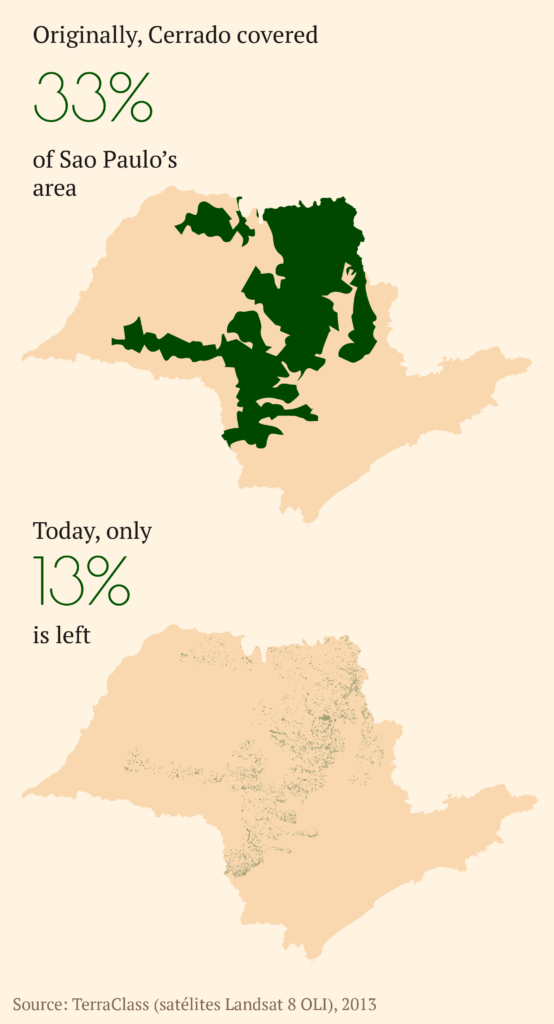 The resistance of some few trees of the Cerrado in the country’s most urbanized area helps to understand the situation in the rest of the state. The devastation of the Cerrado takes on a dramatic contour in the state of São Paulo: in the early twentieth-century, 18,2 percent of the territory was covered by the Biome, yet one hundred years later only 1 percent is left. Less than 20 percent of this small remaining portion is protected by conservation areas or environmental reservations.

Seen many times as “bland vegetation” in comparison to the exuberant Mata Atlântica Rainforest, it took time for the Cerrado to be added to the agenda of the Paulista environmental protection department. It was cleared rapidly and gradually disappeared, and eventually it came to be known and associated only as the Biome found in the Brazilian mid-west. Yet the Cerrado used to span the Paulista territory all the way to the north of the state of Paraná.

Presently, only fragmented “mini areas” are left; fragile islands of vegetation that cannot ensure the perpetuation of endemic species, and alone, are not sufficient for the continuation of the water replenishing cycle to take place.

” Different than in the Amazon where there is a whole region of the Biome with openings throughout, the Cerrado is very badly-damaged. It is a nothing area with few spots, just some stains of vegetation surrounded by areas of intense occupation.”

Marisa Bittencourt, researcher at the Instituto de Biociências (USP’s Institute of Biosciences), in an interview to Fapesp.

The urban and agricultural expansion over the Paulista Cerrado, despite having occurred a long time ago, is cause for very current worries. For researchers, the importance of conserving the Cerrado in São Paulo is of a very pragmatic order as it means protecting the Guarani aquifer as well. One of the world’s largest groundwater reserves, this natural water tank is directly affected by the substitution of native vegetation.

A spring under the shrubs

The birthplace of the waters of Brazil is located precisely in the middle of the Cerrado. The springs of eight of the twelve hydrologic units of the country are in the Planalto Central region. Despite not being within the so-called “arc of the springs” (arco das nascentes), areas further southeast also contribute to maintaining the abundance of waters of the Biome.

Throughout the areas they cover, the savannah and grassland vegetation work as a sponge, absorbing water from the summer rains and slowly releasing it all year-round, ensuring the existence of perennial rivers. The typical vegetation of the humid areas in particular, with its deep organic soils protected by shrubs, stores water and replenishes springs during droughts.

In the interior parts of São Paulo, regions rich in springs coincide with the conserved areas of the Cerrado. On the fringes of the Botucatu municipality for example, the shrub vegetation of the Cerrado ensures sufficient replenishment of the waters to supply cities of the south-central region of the state.

Remnant portions of the Paulista countryside Cerrado are a practical example of how the structure of vegetation can directly and indirectly affect the retention and storage of rainwater. In forests, the larger the density of trees, the more rainwater will be retained by the canopy, thus the volume of rainwater that reaches the ground is “subtracted”. On the fields of the Cerrado however, the opposite occurs; the landscape made up of predominantly small trees and shrub vegetation allows for more rainwater to reach the ground. The vegetation is on the smaller side above ground, but has long and deep roots that extend underground. It is as if the Cerrado were an inverted forest, explain the local populations. The dry branches help the water flow to the roots, and consequently, to the ground. Once underground, the water feeds into the springs, streams, and groundwater reserves, such as the Guarani aquifer. 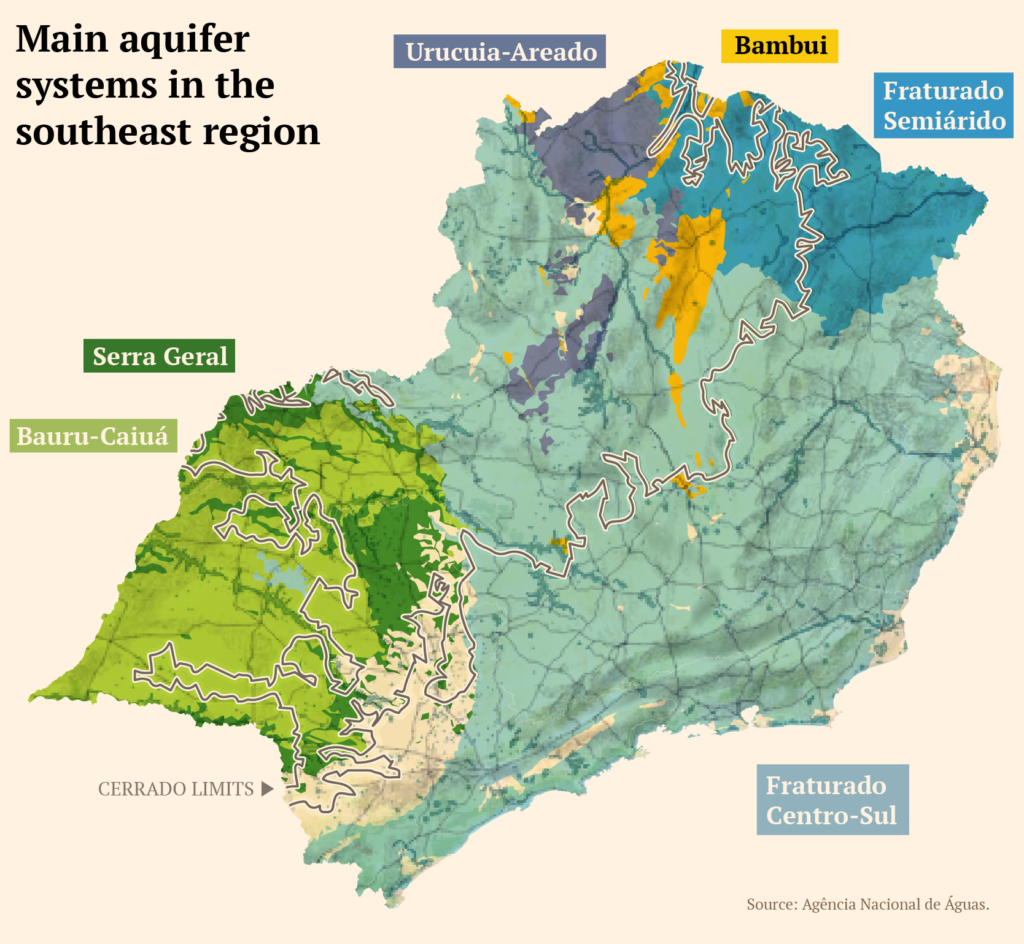 This capacity to produce water has in fact been considered as a viable alternative to expand the groundwater reserves of the aquifer. In the second summit of researchers dedicated to the study of this immense reservoir, the idea of implementing “water farms” came about. These would be areas that would “produce” more water to recharge the aquifer. These “farms” would be made up of conserved or restored original Cerrado underbrush vegetation.

The natural potential of the Cerrado to absorb and retain water is also seen with two aquifers other than the Guarani. The Urucuia and Bambuí are also large reservoirs, and are responsible for the formation and supply of regions of the São Francisco, Tocantins, and Araguaia Rivers. ” In addition to these massive hydrologic basins of continental proportions, the Biome also has springs and sources which give rise to independent drainage basins of significant regional importance,” explains Altair Barbosa, an anthropologist and archeologist known as one of the leading specialists in the Cerrado, in an interview to the site Sou Ecológico.

“Part of a complex web, the waters that spring up in the Cerrado are responsible for the configuration and supply of the great drainage basins of South America”

Efforts to conserve and regenerate the Cerrado in São Paulo began to take shape in the 1990s. In the early 2000s, a research project led by USP charted the Biome’s remnant areas in the state and measured the losses and perspectives for conservation. At the time, researchers identified the importance of engaging people who own land or live in the rural areas, in the conservation effort, seeing as the majority of the areas are found on private properties.

In 2009, the state legislature of São Paulo passed a law that protects the Paulista Cerrado, prohibiting the clearing of vegetation if an area has species at risk of extinction, or if it is important for recharging aquifers. The law has been revised in the past years but still preserves the original points that protect the native vegetation. In practice, however, the conservation of the Paulista Cerrado is not a peaceful subject.

An imbroglio involving the Cerrado came about in the state after the 2012 Forest Code was passed. The new legislation established the obligation to compensate the clearing of vegetation with the restoration of areas within the same Biome and in the same state. At the time, there was some friction between agricultural and environmental groups who disagreed on the importance of restoring areas of the Cerrado within the state of São Paulo.

On one side the farmers, primarily from the sugar cane industry, argued that they would compensate for the clearing of Cerrado vegetation in another state, but within the same Biome. On the other side, environmentalists pointed out the importance of restoring land in the state of São Paulo. In the end, the part that specified that compensation should occur in the state of São Paulo was removed from the law.

In parallel, research centers and the state government developed guidelines for restoring the Biome in the region. A government manual published in 2011 establishes the guidelines and recommendations on how to restore damaged areas. In some cases, the state’s administration will negotiate and waive fines if there is a commitment to restoring damaged areas.

Theoretically, the need to restore the lost Cerrado is an established idea in the state. However, São Paulo is still blind when it comes to actually knowing how much area has been effectively restored.