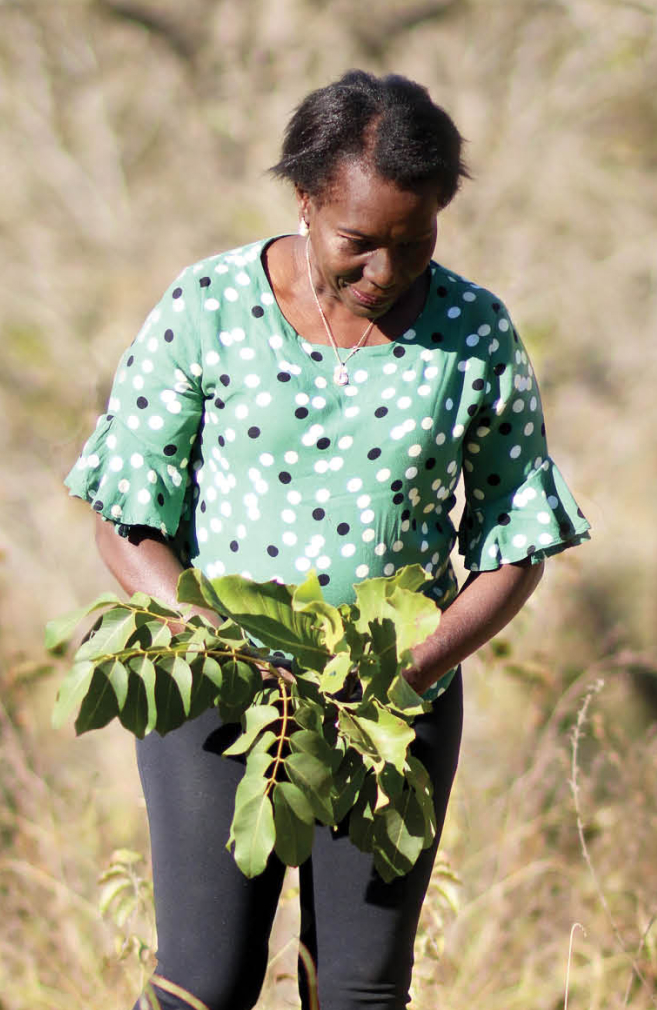 Between the bark and the trunk, medicine is revealed. Lucely Pio knows the leaves, roots, and even the inner bark of native species of the Cerrado. She lives in the state of Goiás and her trade is healing illnesses and ailments with ingredients from the living pharmacy that surrounds her community. Her backyard is the most biodiverse savannah in the world.

It was around the year of 1880 when her great-grandfather, an ex-slave by the name of Chico Moleque, settled on the banks of the Rio Verde (Green River) in an area presently located 420km southeast of the capital, Goiânia. After successfully buying his freedom, Chico Moleque established a quilombo A settlement or community founded by people of African origins. in the area where he raised his ten children. Lucely is a fifth-generation descendant and resistant who keeps the traditions of the Cedro community alive. “We have managed to keep our activities of healing people with medicinal plants alive to this day.” she says.

More than a century later, the quilombolas (inhabitants of a quilombo) still work with some of the same species that their great-grandfathers used. The knowledge passed down through generations has assured Lucely and her community prominence and national recognition for their use of medicinal plants. Today, the laboratory of the Cedro community produces medicines made from 450 different native species, each of which is catalogued with an accompanying description of its uses and medicinal properties.

The women healers of the community founded the laboratory in 1997. Since then, they have formulated around 90 medicines, including teas, balms, tinctures, bottled medicines, and syrups, all of which are used by residents of neighboring towns. All the medicines are natural and prepared from ingredients found in the still-protected areas of the Cerrado. Since 2016, the federal government has officially recognized and approved the use of medicinal plants as a means to improve health, strengthen family agriculture, and create sustainable jobs and income.

The Farmacopéia Popular, a publication over 400 pages long on the medicinal species of the Cerrado combines the ancestral wisdom of the quilombolas of the Cedro community with the knowledge of other raizeira communities. This is a landmark in the collection and cataloguing of popular expertise on medicinal plants, especially because Brazil has such scant literature and accounts on popular knowledge in general. The book is like an encyclopedia; it describes the plants and their uses and their interrelationships with the cultures and social structures of the Cerrado. Written by over 260 authors and based on research done in four states, it provides a glance of the depth of knowledge that traditional peoples have of the biodiversity of Brazil. 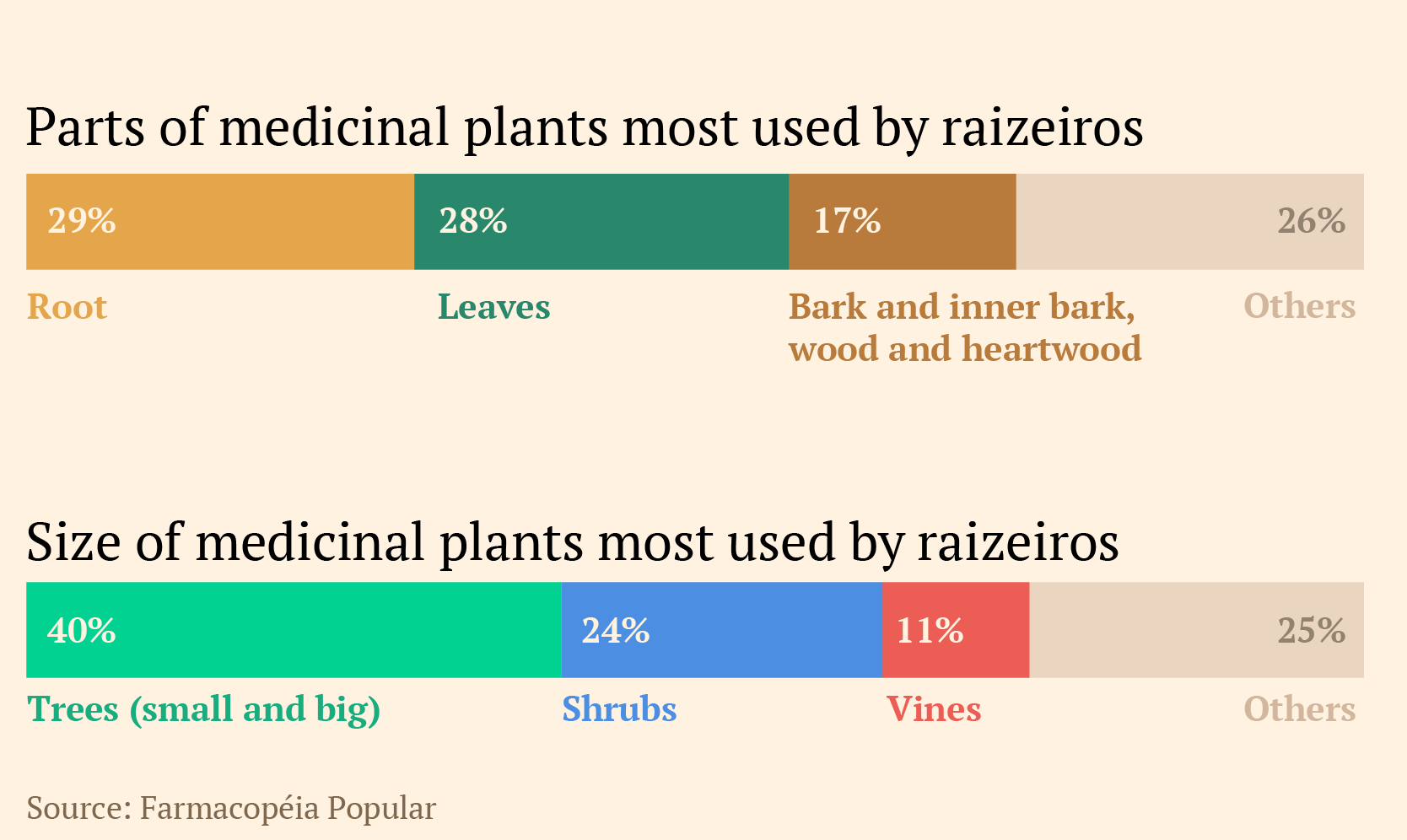 ” I don’t think I could survive without the Cerrado because to me the Cerrado is life. It is my strength, my light. It is energy.”

According to Lourdes Laureano, one of the coordinators of the Farmacopéia project, the fruits and medicine of the Cerrado are present in the everyday lives of most of the country’s population. From the pequi rice -one of Goiás’ most traditional dishes- to the bark of the jatobá, millions of people use native plants from the Cerrado Biome daily. 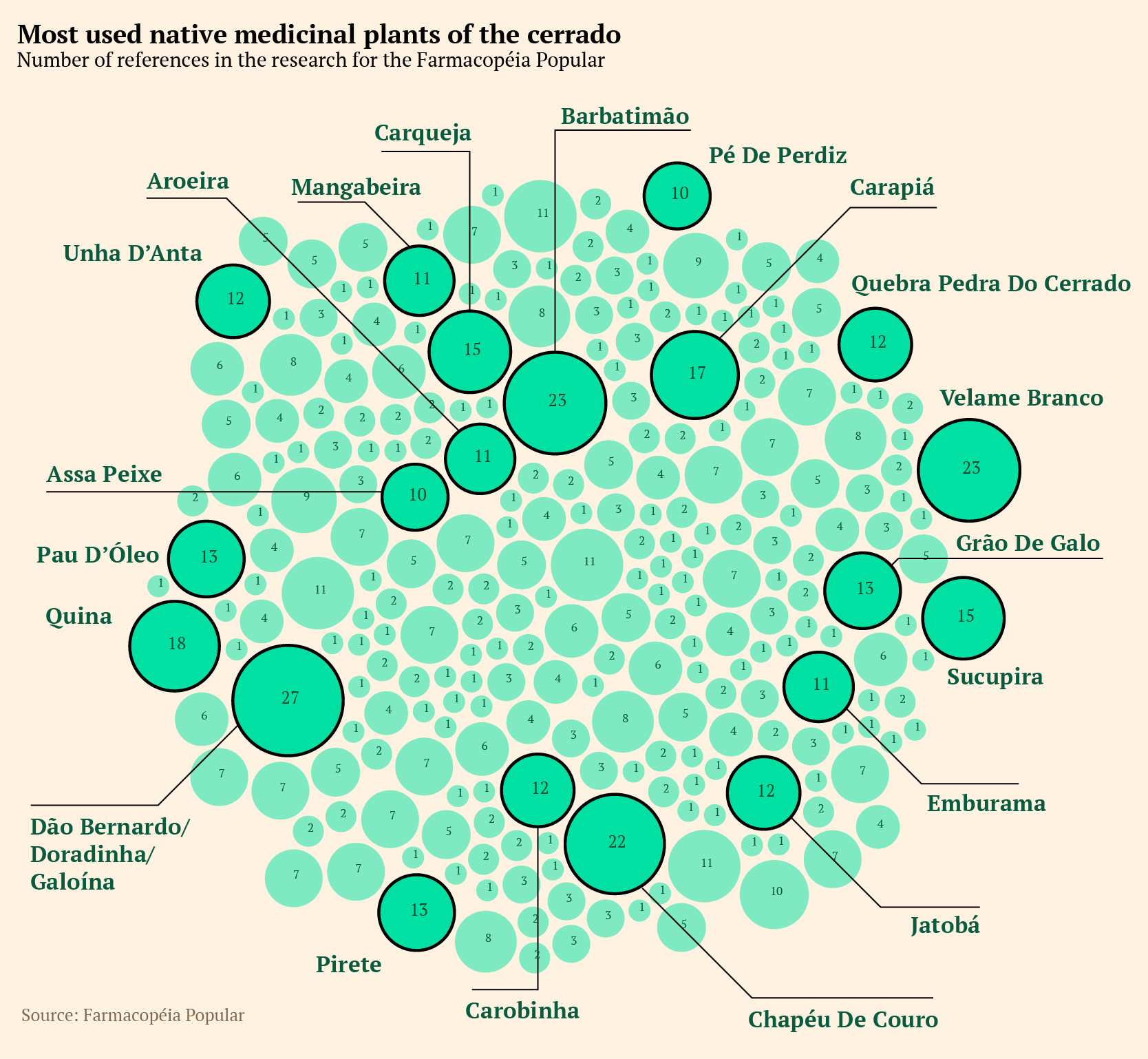 There are no studies that measure the exact number of communities making homemade medicine in the state of Goiás, but for the state’s edition of the Farmacopéia Popular alone, raizeiros from at least 11 different municipalities were consulted.

“Community or home pharmacies (In Portuguese, farmacinhas – literally ‘little pharmacies’)”, usually operating out of people’s kitchens, are common in rural as well as urban communities throughout the state. These community groups are known for the efficacy of their treatments and for having a healthy, trustworthy, and solidary practice. One of the main characteristics of these farmacinhas is to provide access to homemade medicine at a low cost, or even as donations to people who cannot afford them. For Lourdes, this culture of care based on medicinal plants is beneficial both to the people who receive treatment and to the environment. She believes that knowing how to make use of the species of the Cerrado helps keep it alive.

Preserving the Cerrado is a daily concern of the raizeiras’ lives. For decades, they have observed the transformation of the landscape into pastures and farmland and the disappearance of previously abundant native species.

The destruction of the native Cerrado has been intense throughout the twentieth century, but even more so from the 1970s on. Starting in the 1970s, the military dictatorship (1964-1985) incentivized the advance of agriculture in the region with their policies and with the advent of new technologies comprising the revolução verde (green revolution). The flatlands of the state were ideal for the implementation of mechanized agriculture and, being close to the southeastern hub, Góias was prime to become one of the most prized agricultural frontiers.

The percentage of deforested area of the Cerrado in Goiás today is greater than that of the preserved areas. According to the most recent official study of the Biome done by the Ministry of the Environment, 42 percent of the Cerrado has become pastureland. Forty-one percent of the natural vegetation remains; however, these areas are extremely fragmented and spread out. This data, published in 2015, refers to the year of 2013.

According to Elaine Silva, a geographer at the ‘Laboratório de Processamento de Imagens e Geoprocessamento’ (Image processing and geographic information system laboratory) responsible for charting the devastation of the Biome, “only specks of green preserved areas are left, and that reduces the chances of continuity of the biodiversity.” An extensive report published by the Ministry of the Environment back in 2007 had already revealed troubling data on the state of the wildlife of the Cerrado and pantanal Biomes.

13 years ago, research revealed that the areas impacted the most by human activity are found in the states of Goiás, Mato Grosso do Sul, São Paulo, and Paraná. The research indicated that the impact of humans was most intense in areas of the states that have been occupied the longest. Many of these areas correspond precisely to regions of extraordinary biological value. The report describes that the areas with the greatest endemic biodiversity -places inhabited by unique species- are concentrated along the central axis of the Cerrado.

The destruction of the Cerrado in Goías has worsened over the years. According to geographer, Elaine Silva, ” the parts of the Cerrado that remain in Goiás today are located between the areas that suffered the most from deforestation, precisely because there is nothing left to clear.” Today, the consequences of this old and ongoing devastation are being felt primarily in the lack of water. “People suffer from depleted water supplies, even in cities.”

Typical and characteristic trees of the Goiás Cerrado are disappearing because of deforestation caused by the advance of agribusiness, and this has been going on for some time. In an official study done over ten years ago, parts of the state were already listed as priority areas of reforestation of lignified (trees that have woody stems) native trees.

The northeast of Goiás is among the largest regions of the Cerrado with no biological inventory or areas of environmental protection (Unidade de Conservação). This extremely biodiverse region does not have enough conservation areas to preserve the richness of local wildlife. In the state of Goiás, conservation parks represent only 1 percent of the Goiás Cerrado, whereas in other states the average is 2,5 percent. Still, these numbers are significantly lower than the international standards set at 10 percent. In the Cerrado as a whole, less than 3 percent of the Biome is officially protected.

The practice of protection

Lucely believes that in large part, the preservation of the Cerrado comes from work done within and around local communities, little by little. “Our challenge is to convince the people around us not to use pesticides on their crops or clear the vegetation. We try to explain the importance of keeping the Cerrado alive and well.” She believes the continuity of her community’s way of life depends on the preservation of wildlife. The same holds true for Lourdes, a pharmacist who has been working with plants of the Cerrado for over fifty years.

Lucely and Lourdes are both part of the ‘Articulação Pacari’, a social-environmental network made up of community associations that practice traditional medicine through sustainable use of the biodiversity of the Cerrado. Since 1999, they have been responsible for studies and research and political training and campaigns in defense of popular medicinal knowledge and wisdom. For example, Pacari participated and aided in the talks for the formulation of the law on the access and protection of Brazilian biodiversity expertise. The law regulates access to the genetic information and knowledge of plants used by traditional communities. As Lourdes points out, “this expertise is very coveted, especially by the pharmaceutical and cosmetic industries seeking to take advantage of Brazilian species and traditions to sell their products.”

The objective of these guardians of the Cerrado is to protect the popular/scientific heritage and expand its practical applications. Lucely says, “we can see how people’s health in the community improves when they know more about the food of the region, when they know how to use the plants.” Articulação Pacari has more than 600 groups of people who make use of plants and spread the benefits of the land’s medicines throughout the backcountry of the Goiás, Maranhão, Tocantins, and Minas Gerais states. Lucely sums it up: “We spread this tool so that we can take better care of our health and of the Cerrado. That’s all.”