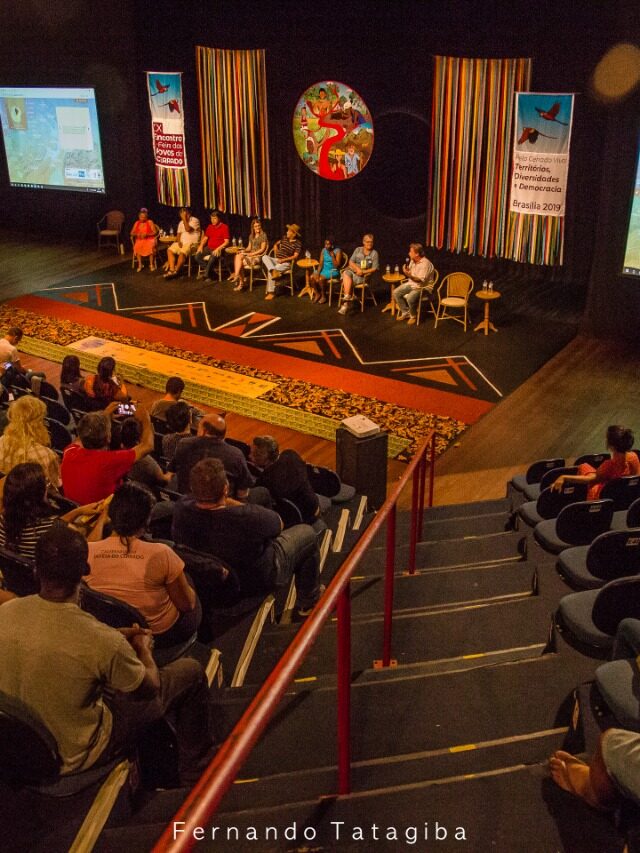 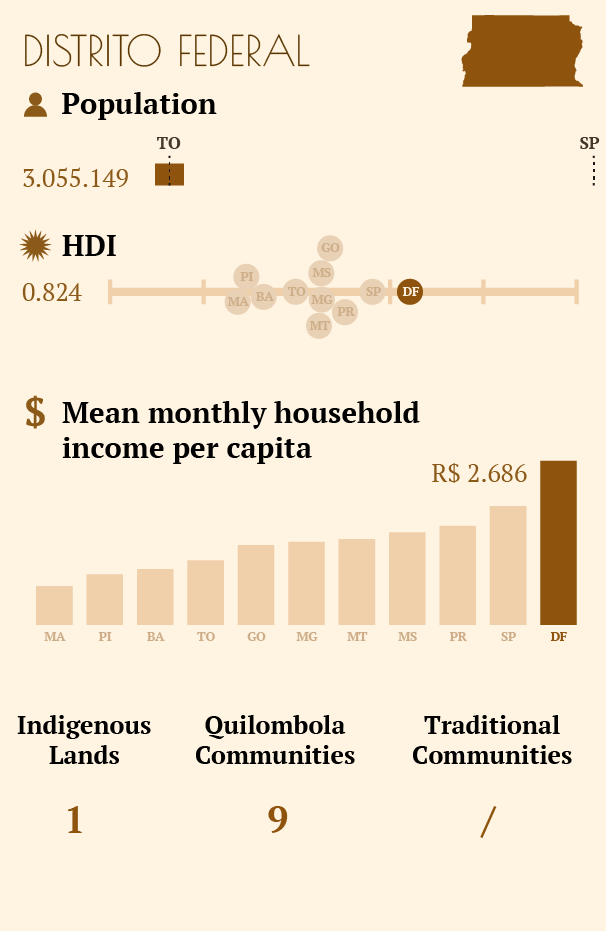 Over seven thousand people met during a four-day event celebrating life in the Cerrado. The year was 2019, and the celebration has been a tradition since 2001. The Encontro e Feira dos Povos do Cerrado (summit and fair of the peoples of the Cerrado) is a gathering of people and ideas for the defense and conservation of the Biome. The event is usually held in Brasília, the capital of the Distrito Federal (federal district), and combines the sale of products by Cerrado communities with panels and discussions on public policies.

Right in the center of Brazil, raizeiras, indigenous peoples, researchers, quilombolas, farming communities, and representatives of several other traditional communities came together around the topic: Cerrado Vivo: Território, Diversidades e Democracia (The living Cerrado: Territory, diversity, and democracy). ” This event was incredible because it brought various peoples and communities together in Brasília to discuss the Cerrado during a distressing moment when public policies, put in place after so much fight, were being dismantled.” says Kátia Favilla, an anthropologist who has worked with peoples and traditional communities of the Biome for over 12 years. She is part of the Rede Cerrado, an organization working with traditional communities, community leaders, and NGOs whose missions are the protection of the Cerrado.

The Rede Cerrado is the organizer of the Encontro dos Povos held in September, and for the rest of the year, it helps resistance movements in the Biome. The organization was born during the Eco 92 summit and today, is associated with fifty-five other organizations covering almost every Brazilian state where the Cerrado exists. Hiparidi Xavante, leader of the indigenous tribes of Mato Grosso and one of the Rede’s managers sums it up: ” it is important because it is comprised of several smaller organizations and that makes us feel united, it makes us feel like we are not the only movement, or the only community under threat.”

In its twenty-eight years of existence, Rede has helped set up several national councils and committees on culture and the environment. It has participated in landmark legislation essential to the protection of the Biome, such as the law regulating access to genetic and cultural information on plants used by traditional communities. Rede is also on the national council of traditional peoples and communities (Conselho Nacional dos Povos e Comunidades Tradicionais), an institutional gateway for the demands of communities to be incorporated into public policy.

“In that sense, the role of Rede Cerrado is essential because it gives visibility to the cause, drawing attention to what we are enduring on our lands throughout the backcountry of Brazil.” points out Dona Socorro of the babaçu quebradeiras community and general manager of Rede. Bridging the divide between the remote areas of the Cerrado and the places where government decisions are made, like Brasília, is the key to the conservation of the Biome. Anthropologist, Kátia Favilla points out that protecting the socio-biodiversity of the Cerrado is inherent to the lives of traditional communities and indigenous peoples.

For that reason, conservation of the Biome’s biodiversity automatically includes traditional communities, says the anthropologist.

Kátia explains that, “In addition to working with the communities themselves on the protection of the Cerrado, Rede also has acts on another front, as it aims to obtain international cooperation in the conservation efforts of the Biome.” The Cerrado is the richest savannah in the world and is home to 30 percent of Brazil’s biodiversity. Compared to the Amazon rainforest, the Cerrado has already lost over half of its original native vegetation and still suffers from illegal deforestation, yet it is not as valued as the Amazon.

As is the case with the tropical rainforest, the ecological balance of the Cerrado is also essential to life on the planet, even if the Biome is lesser-known. It is the source, “the birthplace of waters” that supplies the country and assures seasonal conditions for the yield of food products that reach the whole world. “The devastation of the Cerrado has a deep impact on the climate on a regional scale, affecting farming calendars and the yields of the exporting agriculture industry” says Edegar Rosa, director of restoration of the WWF-Brasil.

Eight of the twelve hydrologic units of Brazil are in the Cerrado. These drain into six of the eight great drainage basins of the country. The Biome stores 40 percent of all fresh water in Brazil and houses three of the main aquifers in the country: the Bambuí, Urucuia, and Guarani.

The devastation on the horizon for the communities of the Cerrado is also worrying for residents of urban areas. According to researcher Altair Barbosa, the devastation of the Biome affects the supply of water in several regions of Brazil. In an interview to the BBC, he explains that the immense network of roots of the Cerrado acts like a sponge, helping to recharge the aquifers that supply water to the faucets of dozens of cities across the country. 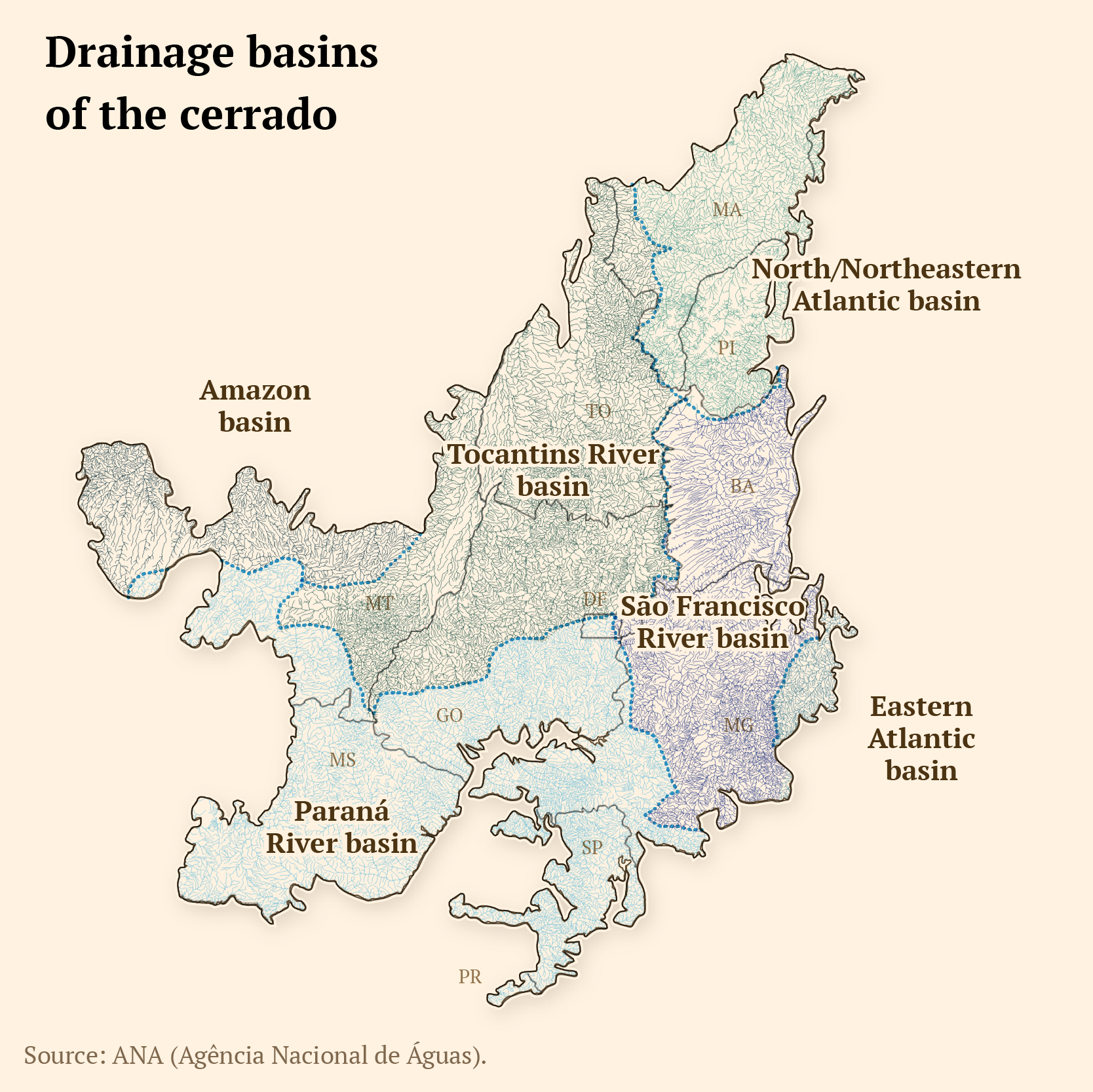 The advance of monoculture has affected the abundance of water in various regions of the Cerrado. Dozens of communities have seen springs dry up after the arrival of the eucalyptus plantations, for example. Other cases have come up in the west of Bahia where disputes over access to water have exploded over the past three years. In the Bahia parts of the Biome, communities have denounced the decrease of river water and groundwater as a result of irrigation methods employed for soy cultivation.

The risk looming over the waters of the Cerrado and their importance drove traditional communities to the House of Representatives (Câmara dos Deputados) in 2019. They delivered a petition with over half a million signatures asking for the PEC 504/2010 constitutional amendment to be passed, which would see the Cerrado and caatinga Biomes become national heritage sites. An unexpected action took place on the occasion when a waiter served empty glasses to the representatives with the message, “do not wait for the water to end before you act” written at the bottom.

The delivery of the petition was a mark for the Campanha Nacional em Defesa do Cerrado (National campaign in defense of the Cerrado), which has been working since 2015 to raise awareness to the impacts that the devastation of the Biome has on society as a whole. This was also an example of the activity that the movements of the Cerrado communities undertake in Brazil’s capital.

The Cerrado at the center of Brazil

The entire Distrito Federal (federal district) is located in the Cerrado. In Brasília, ipês and other native trees bloom in resistance, a reminder that the Biome is all around the capital. Today, most of the federal district’s population inhabits urban areas and the original Cerrado landscapes are practically only found in areas of conservation.

With the capital’s move in 1960, close to 70 percent of the native vegetation disappeared. What is left of the Cerrado is found in areas of conservation: Parque Nacional de Brasília (Brasília national park), the ecological station, Águas Emendadas, the Brasília Botanic Garden, Fazenda Experimental da UnB (Água Limpa), and the IBGE ecological reservation. These are islands in an urban matrix, which makes it hard for species to move freely and for the continuity of important ecological processes to occur.

This fragmentation is presently under even more pressure, as green corridors become targets of intense real estate speculation. In Águas Claras, one of the administrative areas of the federal district, several springs were filled for the construction of buildings and malls for a new neighborhood. The northeastern sector used to be an area of 300 hectares of native Cerrado in the vicinity of the Parque Nacional. Águas Claras alone consumed 400 hectares of vegetation to attend the demands of the real estate market of the Plano Piloto project. According to a study by the University of Brasília, about one fourth of the population of Brasília lives in over 500 gated communities, which overtook previously green areas in the last three decades.

The occupation of the remaining areas of Cerrado around the capital has also recently led to land disputes. In the north wing of Brasília, the Bananal indigenous community, also known as Santuário dos Pajés (The Chiefs’ Sanctuary), was the stage of an intense dispute. There were the indigenous peoples of different ethnicities on one side, among which were the Fulni-Ô Tapuya, Tuxá, Kariri-Xocó, and Guajajara who have settled in the area over the years, and on the other side, the government of the federal district and construction companies invested in the expansion of real estate in the area.

As construction companies began their studies for the urbanization of the area, the indigenous people, who consider it to be a holy area of the Cerrado, requested that the Funai (National Indian Foundation) demarcate and protect the territory. The urban design plan of Brasília was altered in 2009 and the area occupied by the indigenous peoples became available on the market. It was sold in record-breaking public auctions. Two years later, the anthropological report confirmed ancestral presence of indigenous peoples in the area but the Funai questioned the report. Things only came to a close in 2013, when after much dispute, the burning of three indigenous houses, and much protest, the federal court ruled in favor of the indigenous peoples and recognized the Santuário dos Pajés area as indigenous territory.  However, the territory is still pressured by real estate today. The remaining area occupied by indigenous communities, at the heart of the Cerrado, is home to more than 3,000 cataloged species, and yet is still under the threat of the construction of luxury condos for the capital.